Number of Scottish people going into debt and then bust rises by 25%, we can’t carry on like this or the future will be bleak 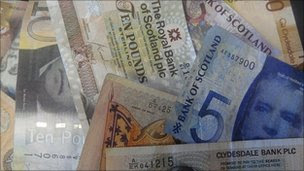 The trouble is debt.

Whether it is the bailouts to the banks or people taking cheap credit and running up huge debts which they can’t afford to service.

The number of people going bust in Scotland rose by a 25% in the first few months of this year, according to official figures.

5,000 people were declared insolvent between April and June.

And things are going to get worse as more and more people lose their jobs.

The unemployment market is oversaturated with people and about to be flooded with even more as Councils cut back on services or carry out public sector reform.

In Scotland, public service reform will be the task that dominates political thinking.

How to achieve more for less and at the same time protecting as many jobs as humanly possible!

But the grim reality is that there will be some job losses because shrinkage is needed to stabilise the situation.

No one has an unlimited supply of money.

And Councils don’t do enough to generate extra income.

The Public sector has to fundamental developed in order to service the needs of its clients and also generate cash.

And any cash generated needs to be ring fenced so that it doesn’t affect their next years’ budget, success shouldn't be punished.

Growth is the key but contraction has to be allowed to take place first!

The idea we can just keep going at the same level is nonsense, society is falling apart.

At the local level, the number of people opting for the voluntary protected trust deed to help write off their debts rose up by 51%.

A trust deed is an alternative to bankruptcy for people unable to repay their debts. It involves a monthly payment arrangement with some creditors and often involves some of the debt being written-off.

The rule of thumb is if you can’t afford it, then don’t buy it.

The poor and unemployed people know only too well how to live within their means, they have no option.

What however works for people, doesn’t quite work for countries and current models of public service are outdated hence public sector reform is needed.

Before things can expand, they have to be put right to work better.

Everyone talks about public sector reform but when pressed their reforms are little more than tinkering, not root and branch.

Debt is a problem and councils have to build up and develop sovereign funds pots to effective long term unsustainable growth.

In the short term that means real pain for some.

Politically that is the way we should be travelling, but it is the only way that the many will have a future.

Not everything can be protected but unless political parties acknowledge that they must stop their short term thinking things will continue as is and will probably get worse.

That means politicians have to stand up and be counted.

But we must contract before we can expand.

George Laird
The Campaign for Human Rights at Glasgow University
Posted by G Laird at 4:43 PM