The Grand Orange Lodge of Ireland throws its weight behind Unionists in the Political Battle for Scotland and The Union, they picked the wrong side! 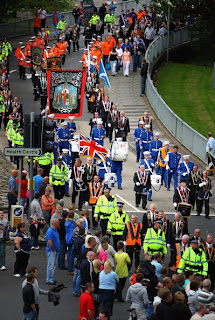 The Orange Lodge of Ireland has stuck up this gem on their site.

“The political battle to keep Scotland within the Union is well and truly under way, and the members of the Orange Order in that country can play a vital role in persuading their fellow countrymen and countrywomen that the United Kingdom must remain intact.

The victory of the Scottish Nationalist Party (SNP) in the recent election to the Edinburgh Parliament is a warning that Alex Salmond and his party sense the tide is flowing with them.

First step in the move to detach Scotland from the United Kingdom will be the Referendum which Salmond has indicated will be held within the next five years.

There is not a moment to be lost if Scottish unionists are to convince the people of that great country that it would be folly to break the link with the rest of the UK.

Nearly 10 years ago the Australian republicans were confident that they would get the majority in a referendum to end the link with the Mother Country and replace the Queen with a president.

The Orange Order in Australia fought a vigorous campaign, along with other royalists, to defeat the republicans, and they won the day.

Alright, the Australian republicans will be back, and they remain confident that they can eventually win the struggle, but concede there is no hope of this happening in the lifetime of Her Majesty the Queen.

The next time they make the attempt, the royalists will be better prepared, and such was their triumph nearly 10 years ago, they can undoubtedly win the argument once again.

Scotland has a huge Orange membership, a vibrant and confident Order, and it can be crucial in the struggle which lies ahead.

But others must join the campaign, and to date the Labour Party, which was all-powerful in Scotland just a decade ago, has failed miserably in combating the nationalists.

It is estimated that only one-third of Scots are currently in favour of independence, but Salmond and the SNP have mounted a very effective and high profile campaign.

The pro-Union camp has lacked charismatic and inspirational leadership, and the Union campaign has hardly been heard.

It would be a devastating blow to the entire British nation if Scotland, which since the Act of Union in 1707 has played such a major role in the nation's affairs, and that of the British Empire and Commonwealth, were to walk away from one of the most successful partnerships in the world.

Northern Ireland, like the other countries of the UK would feel the effects of a break-up of the Union, and indeed the fall-out from such a scenario would probably be felt in this province, which has such long links with Scotland, were this to come about.

It has to be said that the lack of sensitivity on the part of Westminster governments, towards the needs and problems of Scotland have played a leading part in the drift from unionism.

In the days of the Thatcher government, Scots felt that their needs were either ignored or overlooked by the prosperous South of England.

The signs of Scottish disillusionment were to be seen in the early 1980s, and it has accelerated to the extent that there was hardly a single street party held in Glasgow to celebrate the wedding of Prince William and Catherine Middleton.

The Orange Order in Scotland has been in the forefront of loyalty to the Crown, and there is no doubt that it will be active and energetic in opposing, through the democratic process, the threat of Scotland breaking away from the Union.

But it will need the broad mass of Scottish people to be alerted to the danger of supporting the SNP strides towards independence, and thee is no doubt that the Orange Order will do its utmost to awake their fellow Scots to the real threat to the Union.

One concession made by Salmond in recent days is that the Queen will remain Head of State, even if independence is obtained. But even if Scotland remained within the Commonwealth, with the monarch as Head of State, any decision to break the Union would have serious consequences for all four countries, including Northern Ireland, which presently constitute the United Kingdom”.

Nice to know that you are wanted isn’t it?

Something which did catch my eye was this gem:

“The Orange Order in Scotland has been in the forefront of loyalty to the Crown”.

Britishness, days of Empire are over, it is time to move on. In a free and independent Scotland, the Orange Order in Scotland will still have the same rights to march about in the streets.

And the Orange Order should move on as well.

There are people in the SNP who are republicans, but I don’t agree with them, keeping the Queen as Head of State is important, tradition is important; it is part of our history which should be celebrated.

Scotland should decide Scotland’s future; everyone should have the chance to cast their vote.

If Scotland is to go independent, then there are serious questions to be asked of what a new Scotland would look like.

That is the task that the SNP must address in specific detail, being vague will not work, ‘we will sort it out later’ will not work.

A plan is needed; a complete framework covering all departments of a future Scottish Government is needed.

Every nut and bolt!

No plan equals no independence.

If a question cannot be answered then that is a serious problem.

Scottish people vote differently at Westminster and Holyrood elections to some extent.

They see the SNP as being the best to address domestic issues but international issues they don’t have the same trust.

When SNP Candidate Anne McLaughlin was quizzed on defence during the Inverclyde by-election; it exposed a problem for the SNP, which isn’t specific just to defence, it extents into a number of reserved policy areas.

People can’t be left in any doubt about their future.

George Laird
The Campaign for Human Rights at Glasgow University
Posted by G Laird at 4:25 PM