Assassin who killed President Karzai’s brother is hanged in public square on the side of a building, is that the act of those running a democracy? 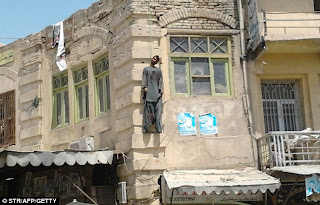 I am not a fan of capital punishment, it is a barbaric form of legalised state murder which is a legacy of less enlightened times.

The half-brother of President Hamid Karzai was killed by his bodyguard,

Ahmed Wali Karzai was shot dead; in terms of Afghanistan his loss will not make a great detail of difference to the West.

Ahmed Wali Karzai was said to be corrupt but in a corrupt country which is sinking beneath a sea of corruption at its highest levels, his behaviour was seen as normal.

His attacker, Sardar Mohammad who was from his own tribe and home town and worked alongside him for seven years has been subject to a brutally lynching.

A group of men in plain clothes probably from the government or police hung his corpse against the wall in Kandahar for around 20 minutes before they carried it away.

President Hamid Karzai is said to be grief stricken over the killing, Karzai allowed a law to go through the Afghan parliament which legalised rape in marriage.

The President, tribal leaders, government officials and others attended first a morning prayer service in the provincial capital, Kandahar.

Then they travelled to the karzai Ifamily's ancestral home village of Karz for the funeral.

Helicopters circled overhead as the coffin was lowered into the earth, people want President karzai dead, he is to some extent a puppet of the West.

Shortly after the funeral in Karz, Mr Karzai held a press conference in the provincial capital.

“My message for them (the Taliban) is that my countrymen, my brothers, should stop killing their own people. It is easy to kill and everyone can do it, but the real man is the one who can save people's lives.”

And presumably be allowed to legal rape women.

The Taliban has claimed responsibility for Wali Karzai's killing.

How credible that is open to debate.

Taliban spokesman Zabiullah Mujahid said in a statement that insurgent fighters killed Wali Karzai because he cooperated with British, U.S. and Canadian forces in the south.

“He was aligned with foreign occupiers,” before describing him as a 'puppet' of the West and claiming he was on the CIA payroll.
Elsewhere a suicide attack was reported at a mosque in Kandahar during a memorial service for Wali Karzai.

Does this look like the West is winning in Afghanistan?

The problem is that Afghanistan hasn’t evolved into a civic society; it is still stuck in an age of tribalism.

Tory defence minister described Afghanistan as being in the 13trh century; hence he was dubbed 13th century Fox.

Ahmed Wali Karzai was considered a master operator and the uncrowned 'king' of Kandahar.

But he was a warlord.

Ahmed was smart enough to balance alliances with tribal and political leaders, drug runners and militias.

And all this in a province where the Taliban still holds much influence.

Although there is much talk about the West pulling out, we will be leaving having replaced one corrupt system (the Taliban) with another, Karzai and his group.

The Afghanistan war was a failure, original it was to capture Osama Bin Laden; he was living in Pakistan, a recognised hub for terrorists.

Then the mission turned into some nonsense about giving the people democracy when the tribal system ruled supreme, democracy is an alien concept in Afghanistan.

We haven’t helped the people, as rich and poor can live metres apart, the rich and corrupt in palaces, the poor in mud huts like favelas that you would see in Brazil.

The West has failed to change Afghanistan for the better.

George Laird
The Campaign for Human Rights at Glasgow University
Posted by G Laird at 4:45 PM

I think it's called a muslim democracy.