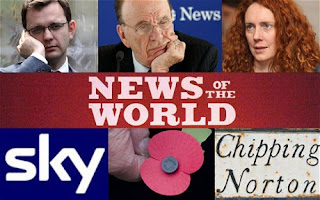 The storm at News International is raging and shows no sign of going away over the hacking of murder victim Milly Dowler.

In what could be seen as a sideshow, Scotland’s Nelson Mandela, Tommy Sheridan case pops up.

Labour MP Tom Watson stood up in the House of Commons and questioned whether or not Tommy Sheridan’s conviction was sound.

During an emergency Westminster debate on the News of the World phone hacking scandal on Wednesday, he said:

"I think the Sheridan trial was unsound and may need to be revisited."

Watson and Sheridan's lawyer, Aamer Anwar, are due to hold a news conference on Thursday at 3 pm at which they will call for police to investigate News of the World witnesses at the perjury trial.

At which time they are expected submit a dossier to police outlining "serious allegations" about News of the World witnesses.

BBC Scotland understands that Mr Watson and Mr Anwar will call for a perjury investigation.

So, is Tommy Sheridan’s conviction unsound?

However, what will be harder to get around is that:

There is a videotape confession

There are several witnesses at a meeting who say Sheridan confessed

There are third party witnesses who place Sheridan at the Sex Club in Manchester.

The News of the World ‘evidence’ given by various people doesn’t alter the above facts.

However; if they have committed perjury than they are in the same boat as Sheridan and could face jail.

A consolation for him is that some of those against him maybe put in prison, which may give him some comfort.

At present the Crown Office says that Strathclyde Police has been asked to make a "preliminary assessment" and report to the Area Procurator Fiscal at Glasgow for consideration of any further action.

"In light of emerging developments regarding the News of the World the Crown has requested Strathclyde Police to inquire into the evidence given by certain witnesses in the trial of Tommy Sheridan”.

And we are talking about Andy Coulson, then Downing Street director of communications.

He stood up in the High Court and told the Sheridan trial last December that he had no knowledge of illegal activities by reporters while he was editor of the newspaper.

He also told the trial:

"I don't accept there was a culture of phone hacking at the News of the World."

And events have proven that phone hacking wasn’t just one rogue reporter.

When asked by Sheridan, who was conducting his own defence in the trial, whether his newspaper had made payments to police officers, Mr Coulson answered:

"Not to my knowledge."

But in the House of Commons, Rebekah Brooks cough out payments have been made before she was allegedly ‘kicked’ under the table.

Sheridan was jailed for three years in January after being found guilty of perjury, during his trial; Sheridan alleged that his mobile phone was hacked into by private investigator Glenn Mulcaire.

Copies of Mulcaire's notebook showing Mr Sheridan's details were obtained by a court order and produced as evidence.

But as ‘evidence’ they don’t take anything away from the substantial evidence produced against Tommy Sheridan.

It is not a defence to say that ‘they are just as bad me, so don’t convict’, the charge against Sheridan was perjury in a Court of Law.

George Laird
The Campaign for Human Rights at Glasgow University
Posted by G Laird at 3:27 PM

he is still guilty the scum bag
jim