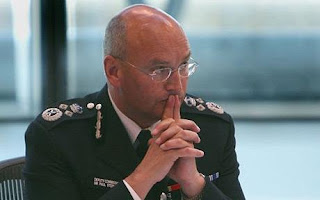 The phone hacking scandal certainly has proven interesting, from one high to another as outrage after outrage appears to be the order of the day.

The latest victim of the phone hacking scandal is Britain’s most senior police officer, Sir Paul Stephenson, the Commissioner of the Metropolitan Police.

He has suddenly resigned over his links to the News of the World phone-hacking scandal.

And held at a London police station!

Sir Paul Stephenson stepped down after he was linked yesterday to free stays at a health resort which employed the newspaper’s former deputy editor Neil Wallis as a public relations guru.

The question is why was someone in his position accepting or allowed to accept that type of gift while holding the post he had.

It was declared but it never should have been allowed in the first place.

This is what I mean by corrupt Britain.

“I may wish we had done some things differently, but I will not lose sleep over my personal integrity.”

Thousands of people may have had their phones hacked.

Rebekah Brooks attended a London police station by appointment thinking she was going to help with their inquiries; she was arrested by Metropolitan Police officers from Operation Weeting.

They are conducting the inquiry into phone hacking including that of murder victim Milly Dowler’s phone.

Her spokesman questioned whether it would be proper for her to be grilled by MPs on the Commons Culture, Media and Sport Committee tomorrow.

She is due to face questions along with News Corp owner Rupert Murdoch, and his son, James, the chairman of News International, over the scandal.

And under the human rights act, she can keep her mouth shut as any questioning could prejudice her right to a fair trial if charged.

Her spokesman said the arrest was somewhat of a surprise, as last week it had been indicated to her she was not on the police “radar.”

“She was going, anticipating to help with their inquiry. She wasn’t anticipating she was going to be arrested. It has many implications for Tuesday. Over the next 24 to 36 hours her lawyers will have discussions with the select committee to see if it will still be appropriate [to attend]. She certainly wants to. It adds another layer of complexity.”

Could Rebekah Brooks be ignorant of all knowledge to do with phone hacking and the corruption of police officers selling information?

Some people would find that hard to believe.

Thousands of pounds walking out the door in brown envelopes and she isn’t asking questions.

Labour MP Chris Bryant questioned whether her arrest was a “ruse” before the meeting.

“It is unusual to arrest by appointment on a Sunday and that just makes me wonder whether this is some ruse to avoid answering questions properly on Tuesday in the Commons committee. I don’t want to overstress that argument but it’s unusual to be arrested on Sunday by appointment, why couldn’t that have happened tomorrow or Wednesday or whenever?”

In his resignation speech Sir Paul said the UK’s biggest force could not afford “any doubts” about its head.

And there are doubts when a senior police officer in his position is receiving £12,000 worth of hospitality at Champney’s health resort in Tring, Hertfordshire.

And the guy handling public relations is Neil Wallis, another ex NOTW person who was also hired as a consultant by the Met Police.

It all looks too cosy.

Neil Wallis was Andy Coulson's deputy at the time of the scandal and has since been arrested.

“I have heard suggestions that we must have suspected the alleged involvement of Mr Wallis in phone hacking. Let me say unequivocally that I did not and had no reason to have done so.”

“I respect and understand his decision to leave the Met. What matters most of all now is that the Metropolitan Police and the Metropolitan Police Authority do everything possible to ensure the investigations into phone hacking and alleged police corruption proceed with all speed, with full public confidence and with all the necessary leadership and resources to bring them to an effective conclusion.”

The Labour Party is milking this story like mad, Shadow Home Secretary Yvette Cooper contrasted Sir Paul’s relationship with Mr Wallis and Mr Cameron’s with Andy Coulson, who resigned over the scandal before he briefly became No 10’s director of communications.

“It is striking that Sir Paul has taken responsibility and answered questions about the appointment of the deputy editor of the News of the World, whereas the Prime Minister still refuses to recognise his misjudgment and answer questions on the appointment of the editor of the News of the World at the time of the initial phone hacking investigation. People will wonder at why different rules apply.”

That won’t happen and if the shoe was on the other foot does anyone think that Ed Miliband would resign?

Not a chance, we would be subjected to some mealy mouth statement of not walking away from responsibility.

Labour are being hypocrites.

Cameron said that he employed Andy Coulson because he believes in giving people a second chance and was given assurances by Coulson.

On the surface that seems fair enough, but Cameron wouldn’t be given be giving second chances if Coulson was at the bottom end of the social ladder.

Something we should all remember.

George Laird
The Campaign for Human Rights at Glasgow University
Posted by G Laird at 12:58 PM

As I think you know, the time has come for David Cameron to resign.