Normal service will be resumed as soon as possible, in the meantime, enjoy a Star Wars clip I made- A George Laird Production, circumstances have forced me to curtail blogging for the foreseeable future, events dear boy, events!

Without a doubt we are entering an exciting time as MPs from all sides of the House of Commons attempt to sabotage Brexit.

This single act of betrayal raises serious questions about who MPs actually represent.

As the chances of a snap election grow, the political tide has shifted, one thing for certain is that certain current MPs will not be coming back to Parliament. Some will be de-selected if you believe Boris Johnson’s threat and others are going to lose their seats.

And let us be in no doubt, some people deserve to lose while some people standing deserve never to be elected.

I have been blogging a long time, but due to an issue I am going to have to stop for a while, this enforced break is not of my choosing, it has been forced on me by health circumstances.

I don’t even know if I can go fight the general election if it happens this year.

The good news is that it is fixable and I will return but I am uncertain when but I will hopefully know more tomorrow which I will add to this post. In the meantime while I am gone, here is a recent clip I made of a star wars theme for you to enjoy.

Since I will be away, if you need to get in touch then drop me a line at georgelaird@hotmail.com if urgent rather than the comments section.

There is a lull before the storm coming.

Finally, I am sorry to have to go, especially at this time which is a period in history which could be a turning point in the relationship between political parties and the people.

UPDATE: yesterday went to the hospital for assessment, told I need surgery, so I am on a waiting list, it will be a while before I am back folks sorry.

UPDATE 2: I will be back blogging on Monday 4th November, sorry about this for putting it back again.
Posted by G Laird at 11:33 AM 14 comments:

Countdown To Scottish Rapefest; SNP leader Nicola Sturgeon and Lesbian SNP MP Mhairi Black are supporting the Gender Recognition Act, but when it comes to the serious questions, they dumb up, “Is a ‘woman’ an adult human female or a person who identifies as such” and ‘if a woman is raped or sexually assaulted in a female safe space because of your gender campaign will you resign from public office immediately? 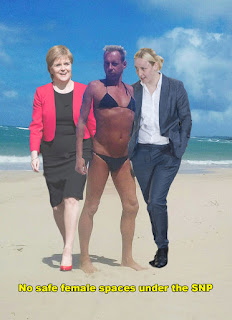 Lesbian SNP MP Mhairi Black has opened her heart about going to the bog, apparently some feminine women have challenged her thinking she is a man. Ms Black has been likened by some people as a ‘guy without a dick’. It could be because of the way she dresses, it could be the way she talks, but it could be she is an unattractive person.

When some women look at her, they don’t see a feminine woman, they see a guy.

In the great ‘trans’ debate, there are people who say there are only two sexes, male and female. This is because people’s DNA cannot be changed, if you are born a male, then your DNA will be male until you die. Although you can pump drugs into effectively customising the body to suppress male traits, the drugs do not change the DNA.

When Mhairi Black was first elected as an MP, we soon learned how much her arse was to feature in her early days at . Due to not likening the food, she spent much time in the crapper as her arse worked overtime. However, I can’t recall a story of anyone challenging her to get out of the women’s bogs in .

The revelation that Mhairi Black has been challenged going into the female bogs needs to be aired, but not in support, what I think needs to expressed is that people don’t care about her situation. If you remember Ms Black with her dyed blond hair, you may have thought how god awful ugly she was.

People don’t care that because part of the SNP grievance procedure is their expression of the ‘right to be offended’. So, why should Mhairi Black speak out against others who feel offended about her?

Is she seeking to remove their ‘right to be offended’ whilst at the same time attempting to ring fence it for herself and certain others?

Apparently so, it seems that Lesbian SNP MP Mhairi Black thinks she is special, that isn’t how the world works. She isn’t special by a long chalk and neither is her inept leader Nicola Sturgeon who also supports the idea that transgender Scots are able to "self-declare". This is why we are getting forced fed people like Mhairi Black saying:

'I've been challenged going into female toilets. I'm not leaving transgender people behind',

When was the last time Mhairi Black saw a transgender person’s penis in a female changing room?

Is it okay for underage females to be in the same area as a naked transgender person in a female changing room?

The issue isn’t about that a minority want to be able to "self-declare" as female, the issue is about access to female spaces. How human rights work is simple, so here how is works, a person’s human rights cannot transgress on the human rights of another, if that happens then the ‘rights’ fall. You cannot impose ‘rights’ by using law and then attempt to tart them up as human rights. The SNP plans were delayed earlier this year, with the Scottish government vowing to hold a second consultation on the issue after critics questioned whether the reforms would put women in danger. You see Nicola Sturgeon cannot square this circle regarding the danger. Some prominent SNP politicians, say the proposals could allow predatory men to enter women-only spaces such as toilets and changing rooms to commit assaults.

This has already happened in prisons, some prisoners ‘self declare’ as female and then attempt to carry out sexual assaults on female prisoners. There is evidence for this in the public domain.

In order to provoke sympathy for herself, Mhairi Black said:

“I’ve been challenged going into female toilets before, course I have. Are you kidding?  I’m the sort of person who can deal with it, but there was one time I didn’t even have to and it was one of the most powerful things I’ve experienced. There was a woman beside me who said [to the person questioning me] ‘Who the hell do you think you are, who are you to police this?’ That is exactly what I needed in that situation, I didn’t have power, but the woman beside me did. In this debate, I’m the person with the power and I’m not leaving trans people behind.”

“I do struggle with people who think their world is crumbling over a bureaucratic change about a certificate. The types of arguments people are using, it is the same tired, homophobic guff just rebranded against transgender people. There are clearly transphobic elements within the SNP, but I think you’d find it hard to find a political party that doesn’t have these problems. It is something that has to be dealt with. I’m of the opinion that the vast majority of it is due to people not understanding it and not being educated enough on it, and hopefully that will change. I have had some very positive conversations with people, men and women, MPs from my own party and others, who want to understand and when you explain what he proposals mean they are behind them. The reforms will still be happening, though. Absolutely, without doubt.”

‘Transphobic’ people in the SNP, so who are these people, are they elected politicians and if so, why hasn’t Mhairi Black formally complained about them?

How much credibility can her arguments have after she stated; ‘I have the power in this debate’?

Is she waiting till after the Gender Recognition Act is passed then make a complaint about these people?

Or will she be mysteriously quiet about the ‘transphobic’ people in the SNP?

If the Gender Recognition Act is passed, it can expect support from the political parties, because they don’t want to be labelled as ‘transphobic’ or upset the LGBT community which is embedded in all political parties. Whether Nicola Sturgeon and Mhairi Black will get support from the Scottish public is another story. At some point as sure as night follows day, there will be a sexual assault carried out by a ‘self declared trans person. On the day that happens, you will find both Nicola Sturgeon and Mhairi Black probably going to ground especially if it is the rape of a underage female child. Or, perhaps both will rush to an LGBT event to show support, much like Nicola Sturgeon always seems to go to a Glasgow Mosque after a Muslim terror attack.

Finally, in the great ‘trans’ debate, we should remember that Nicola Sturgeon and Mhairi Black aren’t pushing Scotland’s agenda; they are pushing their own agenda. Yet again ’s ‘self declared’ leaders, childless leaders are leading the way without taking the people with them.

Here is something which needs to be kept asking from the Spectator piece:

“Is a ‘woman’ an adult human female or a person who identifies as such? This is the question I asked Nicola Sturgeon at the United Nations earlier this year. But, oddly, she wouldn’t answer it”.