No One Feels Your Pain Nicola, SNP leader Nicola Sturgeon reveals 'pain and anguish' of Alex Salmond split, when your pal is charged with two attempted rapes, nine sexual assaults, two indecent assaults and a breach of the peace hard to be seen with him, Sturgeon uses interview at Edinburgh Fringe to attempt to drive up the sympathy vote for herself, her ‘Princess Di’ act really needed the Taj Mahal for dramatic effect 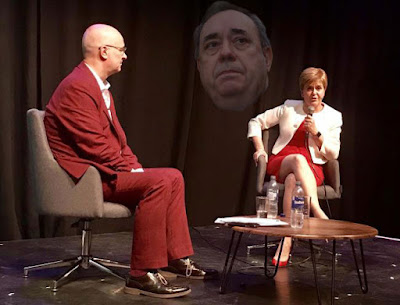 It seems that something rotten is about to come out into the public domain because SNP leader Nicola Sturgeon is looking for sympathy by the bucket load.

In what must be one of the most bizarre interviews of late, Sturgeon has spoken of her “personal pain and anguish” at being separated from Alex Salmond. He faces trial after being charged with 14 offences. The breakdown to refresh your memory is two of attempted rape, nine of sexual assault, two of indecent assault and a breach of the peace. Clearly Nicola has abandoned the SNP slogan,  'I am with Alex'.

The trial is said to be penciled in for next year. In an interview with Iain Dale at the Edinburgh Fringe in front of an audience she missed Alex Salmond after the sudden change in their 30-year relationship. After Salmond stepped down after losing the Scottish independence referendum, he jumped ship at Holyrood to go to Westminster.

Obviously distance makes the heart grow fonder, which is why we saw the development of the Court of King Alex and the Court of Queen Sturgeon sniping at each other. All done out of love? Salmond’s mob was also attacking Sturgeon’s advisor Liz Lloyd, all done out of love? Angst is a terrible thing, you add in a 30-year relationship between Sturgeon and Salmond, plus a trial and it might affect you. After all didn’t they send each other xmas cards, held each other in embraces at conferences, Nicola playing the faithful Mutley to Salmond’s Dick Dastardly?

In light of the disastrous news of the new sick kids’ hospital in Edinburgh being considered as a right off, and that means a £150 Million down the drain, we should have all expected to see Nicola Sturgeon trot out all the usual  sympathy play card. In a throwback to Princess Diana, sitting at the Taj Mahal, Sturgeon attempted to pluck the heartstrings talking about her loneliness. Loneliness of leadership, this with a Cabinet full of dummies, an army of special advisors, a nasty vicious SNP Southside clique, LGBT Pride marches and running off to Europe and anywhere else at the drop off a hat to promote herself?

You can imagine however the loneliness of facing a special Holyrood committee currently investigating why Sturgeon continued to have meetings and phone calls with Salmond. Especially after he told her that two female civil servants had accused him of sexual misconduct.  Anyone with any integrity would have stopped all contact immediately they knew of those allegations.

Relating to her Boris 'problem', she said:

“I will always be polite to visiting dignitaries”.

Clearly the look on her face at the doorstep of Bute House didn’t pass that test or indeed the charm offensive test either.

In a dig at former PM Theresa May, she added:

“Having conversations with Theresa May was pretty soul-destroying. So talking to Boris, at least it was like having a conversation, albeit a bit of a crazy one. You could debate and share views and disagree on things. I’ll say that for him.”

May would stick to a prepared script which left little room for a Sturgeon 'run off at the mouth' session. Even Sturgeon’s ‘how to win friends and influence people’ strategy over Theresa May’s shoes came a cropper after a 'fantastic shoes' comment. Nicola Sturgeon’s attempt to fake warmth died rather quickly, probably cause the PM knew Sturgeon can't be trusted. She grassed up a private Kezia Dugdale conservation it has been alleged in the past.

There was certainly no love lost between May and Sturgeon, then you could say the same about most of the people that Sturgeon has a run in with including US President Donald Trump who allegedly hates. Totally understandable, which is why Donald Trump didn’t see her when he came to Scotland, apparently it was alleged that Nicola Sturgeon wanted a photo op.

Finally, how can Nicola Sturgeon be lonely when the whole of Govanhill in her constituency wants her to get off her arse and fix the ghetto she has abandoned to chase indy. You could spend years talking night and day to residents about what needs done there. If Nicola Sturgeon does feel ‘lonely’, she can go to court and watch the Alex Salmond trial. The event will not have the same panache as Wimbledon, but it will be a packed hoose. Bags of excitement, bags of press, TV crews, it will be ‘selfie’ heaven. Interestingly as a titbit, Sturgeon is now saying she intends to hang around in Scottish politics, does that mean no takers offering plummy EU and UN jobs?

I sense the shadow of Ms Cherry in the background. Sturgeon is on the final lap. It won't be policies that finishes her leadership, rather her past associations with senior figures in her party. Cherry if I believe rightly is a QC, and more qualified than the current crop at Holyrood. And being a QC she will be totally ruthless about who she bowls over to secure the leadership. I reckon Sturgeon will be challenged within 12 months. Any takers?

Any thoughts on this recent poll that the SNP got excited about, George?

"Any thoughts on this recent poll that the SNP got excited about, George?"

One poll is meaningless in terms of specific information, but I take that this is another warning about the lack of work from mainstream unionist political parties to get their act together. I also see this as an emotional poll about people not liking Boris as PM rather than indy support.

SNP over egging the pudding but they have little to celebrate.

An impressive share! I've just forwarded this onto a
co-worker who was doing a little research on this. And he in fact bought me dinner because I discovered it for him...
lol. So allow me to reword this.... Thank YOU for the meal!!

But yeah, thanx for spending the time to discuss this topic here on your web site.