Cancelling the Un-Godley; Is cancel culture in Scotland the new Bermuda Triangle in the Scottish politics and Independence Debate, Janey Godley found out the hard way that when you are in trouble, you have no friends, "Es gibt keine Kameraden, it is important in politics to know who your friends are, and who aren't your friends 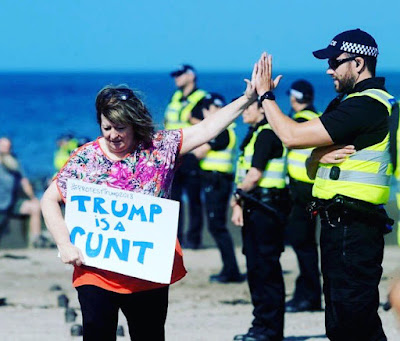 Cancel culture isn't new by any means, its roots can be found in various attitudes in society ranging from discrimination to holier than thou. Regardless of what end of the spectrum you want to cancel someone from, the effect can be devastating to the career of the person being hung out to dry. The SNP and their hangers on approach cancel culture from the Sein Fein methodology. They use specifically gaslighting and labeling people, and attack using pile ons. They also use stock hate terms to brand people as racist, paedophile, homophobe, transphobe and misogynist, I am sure there are plenty other terms depending on the angle they wish to use to try and cancel someone. At the other end of the scale in cancel culture, you have the holier than thou, which doesn't necessarily mean what they are doing is wrong, but the end outcome can effectively be the same. I speak from personal experience as a victim of attempted cancel culture, done by people in the SNP. If you have read the blog you will remember my well known court case of 5 years ago involving someone close the Nicola Sturgeon inner circle. SNP member Tommy Ball tried unsuccessfully to cancel me by alleging that I was paedophile, and then former SNP MP Natalie McGarry joined the abuse. McGarry's role was to link the fake twitter account in my name claiming I was a pedophile with a legitimate post from my blog, and then she tweeted this to her followers and others who read her timeline.

I would imagine at the time, McGarry had a huge of amount of fun doing so, fast forward to the present day, McGarry is finding life less fun with her upcoming trial for  a number of fraud offences, including embezzlement of funds. In her first trial, she pled guilty so that she could get a reduction in sentence, sadly for her, her admission of guilt meant jail, 18 months. Apparently she didn't like jail, but as the amount of money alleged stolen was over £20k, jail is required. Since the failure of the first trial to put her behind bars, there has been delay after delay, but in 2022, it would appear that her and her lawyers days of kicking the can down the road are going to end. Will a jury find her innocent, well in football, anything can happen in 90 minutes but one thing for certain, the referee is going to blow the final whistle on her case. I have a pretty keen interest in this, but it seems this time, Natalie McGarry feels brave enough to have her story told to a jury, or maybe she does the same as last time, and pleads guilty at the last minute. During this time between Women for Independence alerting police after noticing discrepancies in its accounts till present day, McGarry has decided to become a mother. Sadly if she is convicted, mother or not a custodial sentence probably of the same tariff of 18 months will be imposed, as a minimum. If she goes full trial and gets jailed, this will be the ultimate form of cancel culture, taking away her liberty and future prospects, and who knows maybe 18 months would get jacked up to even longer.

We live in a land of cancel culture, somewhere you already know someone who has discriminated against you in your life. I have explained on this blog many times, I have met plenty in my life, people who conceive they are better than you . Even this year, I was a victim of a nasty smear campaign while supporting someone getting selected for the Labour Party Glasgow Regional list. You can see this by going back a few posts, someone attempted to "cancel" me by branding me a 'racist'. This was their cherry on the cake, of me allegedly stealing data and giving it to the Scottish Defence League. Nine candidates stood for Scottish Labour on the Glasgow list, the bulk of those never knew, and I had never heard of them, the bulk also had no chance of being selected, so smearing me was pointless by the no hopers. Also given the Labour's 50/50 discrimination rule to allow women to leapfrog over men, you could also rule out attack from women's candidates and their supporters, they wouldn't benefit from attacking me. At this point, I am sure you are more than capable to work out the rest and reducing the field. In that smear attempt I didn't get 'cancelled' because in the first attempt to sabotage Paul Sweeney's campaign, they never knew I was working on it. Both attempts at sabotaging the campaign happened around the same time that bad stories about Anas Sarwar appeared in the press. The smear attempt on me happened on the 23rd Jan at 23.43 pm, the Daily Record published the story about Anas Sarwar accepting money from a paedophile at 04:30, 24 Jan 2021.

Moving along in the cancel culture merry go round, we now stop at Janey Godley, although I have heard of Ms. Godley, I am not a fan of her work or have any interest who she is. However, someone deemed it necessary to flag up her past tweets online, which given she was fronting Scottish Government ads, she was placed in the firing line. This was unfortunate for her and Nicola Sturgeon because her pickle was centred on a race row. In response to the bad PR, organisers started to cancel her shows, and her ads were pulled. Nicola Sturgeon jumped in to say of the row, #thesethingshappen which is code for Godley has apologised and it is all over. Sadly for Sturgeon, Godley and the SNP, other people took a different view. I don't know what the future holds for Janey Godley, or even if she has a future. When people start throwing labels about and start writing to future employers or businesses, people tend to take the hedgehog approach and dump you. You have seen this many times in politics, someone does something, says something, or should have done something and didn't, and they end up getting cancelled. In Godley's case she had built up resentment with others who chose to strike back, and let's be clear, her association to the SNP was what really did for her.

Interestingly, when Godley's back tweets were flagged up and officially complained about, the SNP Government reaction was tell a complainer, ministers could not “intervene” in her role. When the story went supernova, the same SNP Government did what they generally do with a rogue politician, get rid of them fast. In an ass covering exercise, the complainer was told, by an official she should contact cops if she had a hate crime to report. How noble of them, but let's get it right, the official didn't run off to the cops, didn't file a report, instead it was 'job done, I am out of Dodge'. Godley was later paid £12,000 of taxpayer cash to front the “Stop the Spike” Covid ads which upset people greatly, but they got some degree of comfort when she was axed when posts about the disabled and black celebs came to light.

“The Scottish Government decided to hand an SNP- supporting comedian a large sum of public cash despite these vile posts being flagged directly with officials. This confirms the suspicion that there’s one rule for protected SNP cronies and another for the rest of us”. In a real sense, Russell Findlay is right, the SNP operate as an 'Us vs Them' government, and anyone who is in the 'Us' camp is a potential enemy. Jane Godley was a casualty of war, it is ironic that someone who was slotted to star in an anti-litter campaign “in partnership with the Scottish Government and Keep Scotland Beautiful” would herself be thrown out with the trash. Is there a way back for Janey Godley, well I would ask you to look at Tommy Sheridan in his attempts to bring back his career, he found his political career was shot to pieces, but he was afforded opportunities by the Russians to have a second chance with his show, 'Tommy Talks'. Our Russian cousins aren't particularly affected by the cancel culture phenomenon or sensitive. When you set foot on the political battlefield, there are two things to remember, one, your enemy never sleeps, and two when you meet people who can be manipulated against you, walk away from them, don't look back.

Finally, to be immune for cancel culture, you need to try and place yourself in a position that you can firewall yourself from everyone else. There will be certain situations which requires you to expose yourself to an element of risk. That said, perhaps this piece of information will help you understand Scottish politics better. I have taken this excerpt from the 1947 movie, 13 Rue Madeleine which you might have seen, starring James Cagney, Annabella and Richard Conte, good movie worth watching.

"There are no comrades.

Turn in a comrade, accuse him,

even destroy him if necessary."

Ms. Godley found herself alone in no man's land with no Kameraden and was picked off.