Scottish independence: SNP MSP Bill Kidd wants nuclear disarmament, has he planned ahead for the above ground ‘nuclear’ detonation of the SNP vote in Anniesland when the Labour Party takes the seat in 2016? 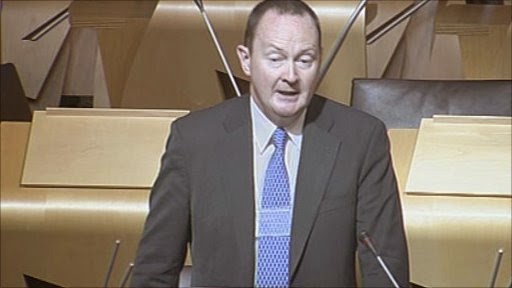 Some people get a wrong idea and stick with it through-out their entire lives.

One such person is the Vice President of CND UK Bruce Kent.

Bruce is now backing a Yes vote the referendum because if successful it would lead to the removal of the Trident missile system from the Clyde.

Rather stupidly he thinks it will strike a blow for world peace.

What it will actually do is weaken the defence of the West.

The Scottish National Party has courted many little anti British groups to join their ranks, but these people aren’t Nationalists, they have their own agenda. The SNP policy on nuclear weapons is wrong just in the same way their anti Nato policy was wrong, on defence they are a bunch of cranks who as I said previously couldn’t defend a paintball hut never mind a nation.

With the big debate coming up between Alex Salmond and Alistair Darling, the SNP will hope Bruce Kent’s comments will be a boost for the Nationalist side.

It won’t be, Scots although they don’t like the idea of nuclear, they want to keep the Trident missile system on the Clyde. There is a reason why Trident is in Faslane, Scotland is in a key position of Western defence.

“It is quite clear that both the major Westminster parties have no intention, despite endless rhetoric, of negotiating their abolition or of getting rid of British nuclear weapons. At a cost of £100 billion, which could so well be used for people’s real needs, they intend to replace Trident with yet another generation of weapons of mass destruction. This is proof enough of how little concerned they are with the global elimination of nuclear weapons. My personal view is that a Yes vote in September would lead to the removal of immoral and illegal Trident from Faslane and Scotland.”

So, what would happen to Trident if Salmond got his way?

It would be moved to somewhere else, the new weapon system would still go ahead; Scotland would still be on Russian missile target packages. You see, the Russians if there was a nuclear war would drop nuclear missiles the length and breadth of British Isles.

You see CND which has been supported and encouraged by the Russians are just a waste of time.

As to all the talk about an extra 2700 teachers or 3300 nurses if we got rid of Trident, that is just fantasy; Scotland would have a massive financial black hole to fill. Scots pay in £56.5 billion in taxes to Westminster and we get back £63.1 billion, an extra 7.6 billion.

The SNP at every election campaigns on Trident, and each time is rejected by the voters, they have only 6 MPs at Westminster, the ‘feeble 6’. Trident isn’t a major issue for Scots, the SNP policy doesn’t work, and the people of Scotland want Trident to remain.

“These comments from highly respected anti-nuclear campaigner Bruce Kent highlight the opportunities Scotland will have to make a difference as an independent country, leading the way on nuclear disarmament.”

The only nuclear detonation in Scotland will occur in 2016, above ground in Anniesland when Bill Kidd will lose his SNP seat to the Labour Party, probably to Bill Butler.

Also Scotland would have as much influence on the world stage as Belgium, that is to say nothing at all and no one taking any notice of it.

Bruce Kent coming out for independence is meaningless no matter how much the SNP try to ‘big’ him up.

George Laird
The Campaign for Human Rights at Glasgow University
Posted by G Laird at 2:57 PM