Scottish independence: Alex Salmond and unpopular Nicola Sturgeon have scrapped together the dregs of humanity into their doomed indy campaign, Cybernat hate is all Salmond has left, today is the start of the end of his political career when he meets Alistair Darling on STV 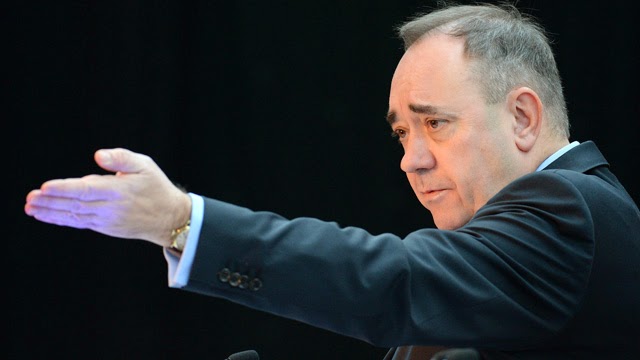 The clock is counting down to end of the farce which is the Scottish independence campaign.

The people of have spoken and the answer is No thanks!

Momentum is firmly with the No campaign.

Yesterday, a cybernat called Mark Armstrong was attacking me on twitter. Mr. Armstrong has a low IQ judging by his comments, which is very much his problem not mine. Doing some research to see what kind of individual he is, I discovered that he posts pictures of himself wearing different types of socks. He also rides a Vespa which is like a hairdryer with two wheels attached; maybe when he grows up he will gravitate onto a moped.

The Scottish independence referendum is making all the Yes oddballs surface; people like Armstrong or ‘Irish Mark’ as he is known to some are an irrelevance, after Salmond and Sturgeon are defeated, he will ride his Vespa and no one will ever hear of him again.

As I am a proud Scot, I don’t want to see my country destroyed, Armstrong wants to join with Alex Salmond and unpopular Nicola Sturgeon in a futile and dangerous quest. It shows how bad the Nationalist campaign is that they are forced to scrap together trash such as him to fight their corner. At present he is trying to paint me as homophobic, unsuccessfully I might add.

A true Scot would not turn over to the likes of Alex Salmond and Nicola Sturgeon.

Just recently the unpopular SNP Deputy First Minister Nicola Sturgeon insisted a feel-good factor from the Commonwealth Games would propel the Yes side to victory. Nicola Sturgeon was trying it on like she did at Govan shipbuilders to claim some credit for the Yes side as caring when she actually did nothing as per usual. There is and will be no momentum for the Nationalists from the Games, they were just a good sporting event. One wonders does she actually think this shit up herself, or is she simple minded or does she have it written down for her. Whatever her ‘problem’ is other than her fake hair colour, she can’t sell the ‘big lie’.

In 2012, I was at the SECC for the Glasgow City Council elections where the Labour Party handed Sturgeon, her ass in a brutal and dramatic fashion. No Sturgeon powerbase in , as she walked passed me, the look on her face was a picture to behold; it looked like someone has eaten her last rollo. Surrounding yourself with cretins really does have a downside in Nationalist politics, and poor Nicola, the shop soiled white hope of is finding out the hard way, stupidity is a poor substitute for intelligence.

The No Campaign are the ones who are winning the argument of hearts and minds in this campaign, not the Nationalists who are forced to use lies and deception that people are interested in their poisonous vision, its quite the opposite, people don’t want a damn thing to do with them.

The first head to head takes between Alex Salmond and Alistair Darling on STV, Salmond is all spin and without substance, Alistair Darling is the opposite, gravitas coupled with substance and experience. It is said that Salmond has reportedly been receiving help from Claire Howell, the lifestyle coach, apparently in the SNP, they are so many who are responsible for victories!

Claire Howell’s big thing is to get clients to think positive but that isn’t Salmond, he has lost the argument, he stands in front of Alistair Darling with nothing to show for his two year campaign. No gamechangers, no plans and no vision except empty hollow rhetoric of ‘it’s all the fault of the English’.

Each day the Nationalist SNP campaign is falling apart, they are losing badly, their anti English campaign was a poor choice which was always going to backfire on them. People who hitched their political star now realise that they have backed the wrong choice, the wrong man and the wrong party.

Alex Salmond is a poor champion, he doesn’t represent the working class people, he isn’t a people’s champion; he is a ‘rich man’s’ champion.

The SNP says the more voters hear the arguments, the more inclined they are to back independence. This is based on pointing the finger and telling people of that the English are to blame for their lot in life. And if they back him, they can have a fairer country, that as many Scots know is a fantasy, the SNP have no agenda other than wanting to be the ‘new establishment’. Their record on helping the poor is pitiful; the SNP leadership had to be bounced into doing something about the bedroom tax in , they wanted to let people suffer to get their votes but that rather fell through.

So, let us talk facts, Professor David Bell, a former Holyrood Finance Committee adviser, has criticised the SNP's plans to grow the economy after independence as "unrealistic." The SNP just pick a number and that number is always on the Brightside. At present, there is a ‘joke’ going around by the Nationalists of a massive secret oil field off Shetland which someone’s mum managed to hear about, and she passed it on.

Don’t you realise what that means?

It doesn’t mean riches for you and me; it just means someone has a mum!

If you want to know how bad and desperate the Scottish Nationalists have sunk into the cesspool of gutter politics, then look no further than former SNP MSP Lloyd Quinan. He is on public record at a Yes meeting as saying that if people voted No then they are "bad parents". But what do you seriously expect; the Nationalists really are dragging the bottom of the barrel for supporters to champion their failed cause.

Alex Salmond is no statesman and he can’t hide it either, he could do a bit of emotional pleading like Tommy Sheridan did in his summing up but as we all recall, that didn’t work for Mr. Sheridan terribly well.

Judgment is coming for Alex Salmond!

George Laird
The Campaign for Human Rights at
Posted by G Laird at 1:45 PM

Cybertwat riding a Vespa. Lol. Brilliant. Maybe when his balls drop he'll go for the big boys' licence so he can ride a proper motorbike. Is wee Eck up for a one to one with George Galloway? Probably not. Georgie boy would rinse the ex banker Salmond.

Just watched the debate on STV.
I can't believe that the leader of the Scottish Nation took the joke about driving on the right hand side of the road seriously. And what about the Alien's?
But Darling and some of the audience were having none of that nonsense. They pinned him on the currency issue, and again and again no answers from Salmond.
The SNP had Independance in the bag but, they didn't plan for it. Except to shout down those who don't want it.
THEY FECKING SHOT THE ODDS ON FAVOURITE.