Scottish independence: when is Scotland’s ‘jolly fat man’ Alex Salmond and unpopular Nicola Sturgeon going to come clean about the SNP’s secret plans to cut welfare and pensions, joining the Euro and forcing massive austerity on the poor and vulnerable? 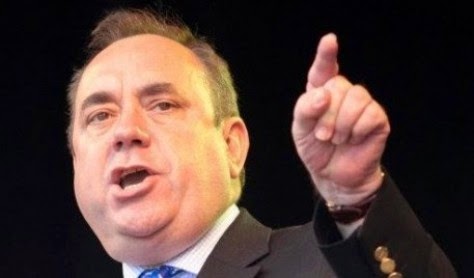 Have you ever been screwed hard?

Do you fancy being screwed by Scotland’s ‘jolly fat man’ Alex Salmond or unpopular Nicola Sturgeon?

Well, regardless whether you fancy it, Salmond and Sturgeon really want to screw you, the SNP government has big plans as they privately prepare for cuts to jobs, welfare benefits and pensions in an independent Scotland.

Scotland wouldn’t be the ‘Athens of the North’, not the land of milk and honey, not nirvana, not the home of the Gods on Olympus.

This is Alex Salmond’s legacy to the Scottish people, hope replaced with hopelessness and a race to the bottom economically leading Scotland into a second Thatcher style era which will make the struggles of the 80’s working class look like a Golden era of joy.

The harsh and brutal economic reality is that the SNP leadership will slash welfare and other services to the poor and vulnerable to balance the books. Thousands of Scots will be thrown onto the scrapheap and future generation face being denied a future.

You see Alex Salmond runs a rich man’s party; this party is anti working class. In the run up to the referendum, you might think everything will be wonderful like an episode of Borgen, Sturgeon’s fav telly show.

Scotland faces a bleak economic future, the template of that will be what happened in modern day Greece, their entire economy was wrecked and their assets were effectively stolen from them by a weak Greek Government who sold them out.

To make matters worse, SNP Ministers in Edinburgh if they did get a Yes vote would also happily accepted the Bank of England in London would still have a controlling veto over public spending in Scotland. Salmond would automatically give up Scotland’s sovereignty to what would be a foreign government. That although currency union is now unlikely, it is still a carrot used by the SNP to voters that nothing will change after independence.

The pound is a smokescreen, the louder they shout the less people will look at their real agenda, they want ‘lender of last resort’ facility from the European Central Bank to underwrite their government. The pound is stepping stone to EU membership and eventual joining of the Euro. The SNP leadership would play grudge, grievance and malcontent to justify accepting the Euro, we would have a story spun of the bad English hurting Scotland out of spite with Alex Salmond as the ‘hero’. Salmond’s finally journey of ‘the man who saved Scotland’ in its time of need. A fairytale which is a horror story without a happy ending for working class Scots!

If you think that North Sea Oil will save the day, think again, oil is a great asset but you cannot base an entire economy on that taxation revenue constantly being high.

Independence is forever, oil is not!

In human terms think of it like Alex Salmond’s political life, each day a little less is left, his political DNA is continually recycling downwards, in each cycle it becomes more and more mutated, rather like the aging process. At some point the recycling process will become unsustainable and lead to sudden and total shutdown.

In Scotland, life will go on without him, he can’t re-invent himself; he is the man who lost the Scottish independence referendum. He is man who didn’t plan; he is man who attempted to push a massive political fraud on the Scottish people. His ‘jolly fat man’ act, his fake ‘man of the people’ routine will be exposed pieced by piece for the sham he and his party are.

Maybe at that point some time in the future, a new proper Nationalist party can emerge which puts the people of Scotland as its prime concern instead of the rich, that party will not be the Scottish National Party, they have shown their true colours in this campaign.

This referendum is all about one man and his vanity project, that man is Alex Salmond, a vote for independence is a vote for Alex Salmond. The fact that he roped in some gullible idiots of various persuasions such as the members of the Scottish Greens and SSP to join his voyage of the damned shouldn’t detract from that observation.

It is interesting that in the latter stages of this campaign the Scottish Greens are starting to edge away from Salmond, they should have never climbed in to bed with him in the first place.

bookmarked!!, I love your blog!