Nobody Likes Nicola, SNP leader Nicola Sturgeon is rejected by Prime Minister Boris Johnson from having an official role at major climate change event in Scotland, 90,000 delegates, 200 world leaders and the world media, the largest summit the UK has ever held but Boris says he doesn’t want to see Sturgeon "anywhere near" the climate summit, for Sturgeon to be humiliated like this is long overdue payback 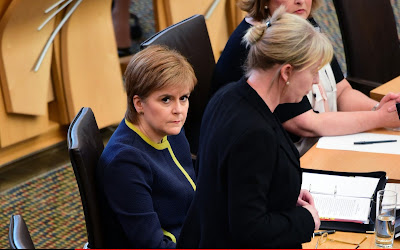 You would have to have a heart of stone not to laugh, but in a massive downgrading of political authority, Prime Minister Boris Johnson has point blank refused to give Nicola Sturgeon an official role in the Glasgow COP26 climate summit. The level of humiliation is tremendous, naturally this slap in the face will see the cybernat community doing their traditional ‘nationalist anger explodes’ route. We should remember that this event is for important people, not failing independence wannabes.

The climate change conference in Glasgow is later this year, 9–19 November 2020, this means a whole year of Nicola Sturgeon festering away, relegated to the sidelines, a fringe person. Of course this is assuming she is still hanging around post Salmond trial.

The conference will incorporate the 26th Conference of the Parties to the United Nations Framework Convention on Climate Change (UNFCCC), the 16th meeting of the parties for the Kyoto Protocol (CMP16), and the third meeting of the parties for the Paris Agreement (CMA3). That’s the official bumf but what matters to Nicola Sturgeon is the denial of prestige in her frequent attempts to be seen as a world leader.

Former UK Minister for Energy and Clean Growth, Claire Perry, was appointed President of COP26. The UK government however abruptly removed her from the Presidential post on 31 January 2020, stating that the post would become "a ministerial role". Those are the breaks, but while in post, Claire O'Neill said she had made the ‘let Sturgeon in’ as a suggestion to end the "stand-off" between the UK and Scottish governments over the global conference. Claire Perry probably made the offer in good faith, but the reality is the climate in Scotland politically is very cold and bitter, hence it is a time to wrap up, dig in and wait till the season of Sturgeon’ officially ends.

As well as speaking of Nicola Sturgeon’s humiliation, she also accused the Scottish government of behaving "disgracefully" ahead of the conference. For those who are used to SNP pettiness this is par for the course. Apparently, the Scottish government had been contracting buildings from the site which should instead be used by the climate change conference. So, one wonders what events will the SNP Government be running, climate conference Scottish version? Whatever the events, we will see Nicola Sturgeon pushing herself forward centre stage, trying to then piggyback on the main conference which she has no role in. I suppose a question that would be asked is what does Nicola Sturgeon know about climate change?

She is no expert, she is no academic; she isn’t even a gifted amateur on the subject!

This conference is a biggie; it is ‘starring’ Sir David Attenborough, although his brother Richard Attenborough starred in the movie, The Great Escape, Sturgeon on the other hand wants to ‘break in’ by any means possible. The fact is when it comes to climate change, Greta Thunberg; the young woman has captured the market on the perspective of the female of the species. Greta is the poster girl, she has the youth; she has built up the presence, what has Nicola done? If you want to see ‘messing up’ the planet, then trot down to Govanhill, the modern day ghetto in the heart of Glasgow. Sturgeon’s lack of action on saving the planet is there in all its glory!

SNP leader Nicola Sturgeon in an attempt to play the ‘statesman’ tweeted:

"It's not about Boris Johnson or me - it is about tackling the climate crisis. My commitment is that political differences will not stop me and my government working to make it a success."

Is that why the SNP Government hired buildings from the COP site and was accused of ‘absolutely behaved disgracefully’? Nicola Sturgeon and her crew are there to help, or are the buildings being held hostage so they can be used as a bargaining chip?

Once thing, I really get a giggle out of is when the Prime Minister Boris Johnson told a fringe event at the Scottish Conservative conference in September that he did not want to see Ms Sturgeon "anywhere near" the climate summit as it was the UK government that had brought it to Glasgow rather than the SNP. So, its Feb 2020, we can expect nearly a year of SNP playground politics as the SNP try to by hook or by crook try to wedge Sturgeon in through the door. This conference is a huge event happening right here in Scotland, the sight of Sturgeon looking out the window of one building at the COP site while all the action is happening across the other side will be a joy.

Up to 90,000 people, delegates, observers, heads of state and media are expected to attend COP26. The event will be the largest summit the UK has held, with up to 200 world leaders expected for the final weekend of talks. Can you feel the level of humiliation rising in Nicola Sturgeon’s head; kept out, shut out, not wanted!

One wonders; is the SNP Government hiring space at the COP site in an attempt to funnel world leaders into meetings with Sturgeon? A face saving last resort exercise if holding the buildings to hostage doesn’t pay off? Do, you have your T shirt printed, ‘Nicola Sturgeon, no role at COP26’ yet? Between now and the conference, we will just have to hope that Boris Johnson ‘stays the course’ and keeps firm in his no role for the poisonous wee drawf.

George Laird
The Campaign for Human Rights at Glasgow University
Posted by G Laird at 2:16 PM

George, you have made my day! XD :D

as a Jock, living in Jockland....who the fck keeps voting for them? I know no-one who votes for the Marxist SNP....but I have a plan, seeing as SNP voters vote by the name of the party, which makes it sound oh so William Wallace like, I propose a new party, called the SIP....Scottish Independence Party....my policy would be Independence from Westminster ...AND THE EU.....I could probably take 34% of her voter base in the first attempt and leave her with a hung Holyrood representation.....of course Indy from the UK will never happen, too many folk don't want that but who cares, it's about getting the Marxists out and onto the gravy train and do a bit of a Scottish Q from inside the powerwalls of Holyrood and expose the masonic paedos that reside there

You have made not just my day but the whole bloody year! In tears thinking about her going crazy with rage!

Aw didums. Sturgeon should learn to do the day job first

He's me looking forward to "The People's Republic of Jockistan"

Glad to see her slapped down. And what of the Westminster clowns with their childish stunt over EVEL? They are a fucking embarrassment to Scotland.

Jimmy Krankie is a horrible woman
Boris she lost last time now she wants another go.

Great idea, just when is this party starting?

On a serious point about the Scot Govt hiring these buildings. Surely it could be considered an abuse of public funds? And whoever approved it, are they not potentially committing an offence, namely misconduct in public office?

Brilliant... I bet this will make her a wee bit Cranky 😂

How much tax payer money is she diverting away from real needs for her stupid stunt?

What is it about unionist, Rangers supporters, orange order fuckwits are so thick as shit?

Got you thinking, and you didn't like it, thinking that is.