Nowhere to run too, nowhere to hide; Prime Minister Boris Johnson totally rejects SNP leader Nicola Sturgeon's demand for second independence vote, Sturgeon’s "personal promise" that the referendum in 2014 was a "once in generation" event comes back from the political grave to haunt her, will she reign or will she pushed from her zombie SNP government? 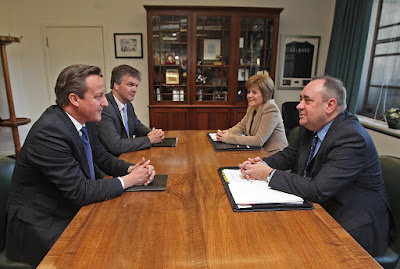 Today is an important day; it is the day that Prime Minister Boris Johnson effectively slammed the door shut on indyref 2. And as if by magic, I have found the perfect song on youtube to get into the groove. With indyref 2 now totally dead, the political focus of Scots will be looking at the SNP record’s in government. A woeful record of incompetence leading to poor services, longer waiting times and death.

It was always obvious that Boris Johnson would reject Nicola Sturgeon's demand for second independence vote as his majority makes him the political king maker of the UK. The reply to Nicola Sturgeon took almost a month to get back to her, but the decision was never in doubt.

"The UK Government will continue to uphold the democratic decision of the Scottish people and the promise that you made to them. For that reason I cannot agree to any request for a transfer of power that would lead to further independence referendums."

Dragging out the reply was also a message that politically, SNP leader Nicola Sturgeon is irrelevant, as are her 48 MPs who Sturgeon had pinned her hopes on keeping Jeremy Corbyn hostage in a hung parliament. The PM has flatly refused to grant a so-called Section 30 Order to enable Holyrood to hold another referendum and the cherry on the cake; he said the 2014 vote was effectively “for good”. It will be a cold day in hell before Sturgeon sees a Section 30 out a Conservative Government even if Boris moves on after probably three terms.

In a tired response, Sturgeon tweeted:

“Tories are terrified of Scotland's right to choose because they know that when given the choice we'll choose independence. Tories have no positive case for the union, so all they can do is attempt to deny democracy. It will not stand. The problem for the Tories is the longer they try to block democracy, the more they show the Westminster Union is not one of equals and fuel support for independence. This response predictable but also unsustainable and self-defeating. Scotland will have the right to choose."

Her tweet comes after the silly little man Ian Blackford said that Boris Johnson would ‘cave in’, the question is ‘cave in‘ too what, the SNP have no power, no mandate and no backing other than the Scottish Greens and a few disaffected members in the Scottish Labour Party, relics and has-beens and fools. Nicola has always been good at attracting the 'small people'.

The comical part of the PM’s letter to Sturgeon was when he said he had "carefully considered" the case she had made for powers to be transferred to Holyrood that would allow it to hold a vote on Scotland's future”.

This in Glaswegian terms is called ‘taking the piss’.

But Boris Johnson argued that both Sturgeon and her predecessor Alex Salmond had made a "personal promise" that the referendum in 2014 was a "once in generation" event.

“The people of Scotland voted decisively on that promise to keep our United Kingdom together, a result which both the Scottish and the UK Governments committed to respect in the Edinburgh Agreement.”

Having used the "once in generation" declaration, it seems that it has come back to haunt Sturgeon for good!

“Another independence referendum would continue the political stagnation that Scotland has seen for the last decade, with Scottish schools, hospitals and jobs again left behind because of a campaign to separate the UK. It is time that we all worked to bring the whole of the United Kingdom together and unleash the potential of this great country."

In others words, the Scottish Conservatives are keen to have a crack at winning the Holyrood election.

This week in an interview with The Herald, local village idiot Ian Blackford, the SNP’s leader at Westminster, claimed that Cabinet ministers had told him privately that they believed the PM’s position was unsustainable, although he did not name the ministers. And like a hungry dog, Blackford bite, strange isn’t it that Blackford couldn’t work out he was being setup to be made a fool of. Sadly less than proud Scots voted this fool back into political office.

There is no way that Nicola Sturgeon can engineer a second independence vote legally, morally or politically, she is effectively been cast adrift, at the mercy of the political tides in the UK. There is no spark of hope on her horizon, and I hope you will play the song as you read this post, because in the current situation it is banging. No 10 insisted the UK Government was united in its opposition to facilitate indyref2. Scottish Sec, Alister Jack, again made clear at the weekend that even if the SNP won a majority of seats at the 2021 Holyrood election, then this would not provide it with a mandate to hold a second vote on Scotland’s future.

In a previous post, I said 2020 for the SNP was a ‘year of fester’, as the trial of Alex Salmond is set for March 9th, there will be no indyref 2 cover for Nicola Sturgeon to hide behind. From now on the SNP will be shifting into high gear to protect Sturgeon as angry Yessers finally grasp that they have been played by her and her SNP clique. You have to play this song, close your eyes and imagine Sturgeon and her spad cohorts running between buildings, nowhere to run too, nowhere to hide!

George Laird
The Campaign for Human Rights at Glasgow University
Posted by G Laird at 2:12 PM

In 2014. We voted to remain part of the United Kingdom. I voted Yes for independence, grudgingly I did except the result. We can't have referendum after referendum. It makes a mockery of democracy.
Time Nicola started making Scotland a better place to live in and stop shouting every day for another referendum.
As far as Blackford. Is he really the best the SNP can put up as leader in Westminster?

Today is a good day, George!

If you read a lot of the nats comments they seem to think they can just dissolve the Union in the same way that someone cancels a gym membership.

Once the reality dawns on them this is going to get very ugly indeed.

What pisses me off is when the SNP accuse the Tories of being "undemocratic". Ffs the indy ref was democracy in action. If you want a laugh, read the comments by the legal experts on Wings. I think they forget that Cherry is a QC and I would think more than capable of assessing the legal position.